This recipe is from the cookbook:  Cooking with all things Trader Joe's.
By Deana Gunn and Wona Miniati
This cookbook was a birthday gift and it is signed by Wona!~ 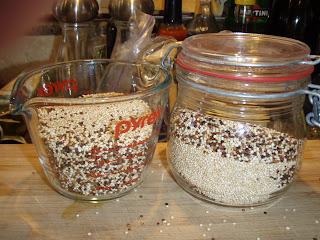 Start with a cup of dry quinoa.    I keep a jar of mixed bulk quinoa.  This is red quinoa mixed in with normal quinoa.  Red quinoa has a higher iron content than the regular. 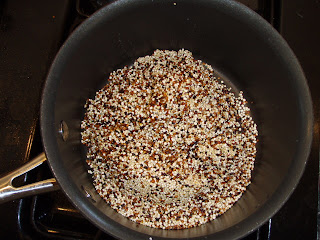 The recipe called for rinsed quinoa.  I have to be honest, I have never rinsed it before but perhaps I will start rinsing it from here on out. Rinse just like rice, in a fine strainer or in the pan and drain a few times until water runs clear. 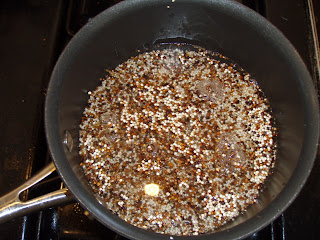 Add in the water 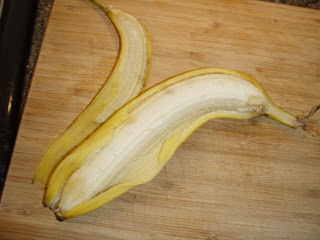 One ripe banana.  I think next time I may actually add in 2 ripe bananas to give it that much more flavor. 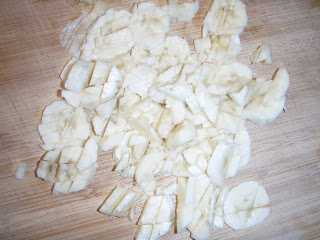 Give them a quick rough chop. 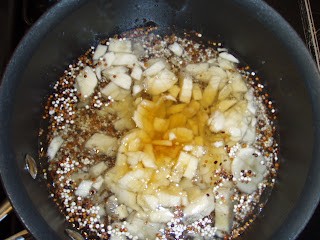 Add them into the pot with the vanilla. 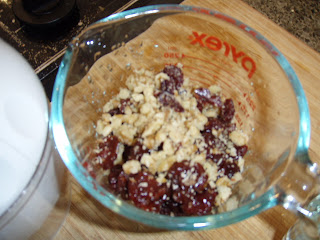 While it is cooking measure out your chopped nuts and dried fruit.
I used what I had on hand, which were dried cherries and walnuts. 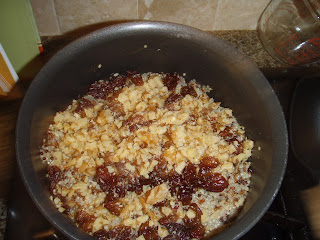 Add the nut/fruit mixture into the cooked quinoa and you have yourself a meal.~

You can refridgerate or freeze the leftovers.

Quinoa (pronounced KEEN-wah) is a nice alternative to oatmeal in the morning: just a little bit is very satisying.  Quinoa is high in protein and gluten free, it is super healthy and has a nice "seedy" texture and a nutty taste.

Add Quinoa, water, banana, cinnamon, and vanilla to a small saucepan.  Bring to a simmer and cook for 15 minutes or until all the water is absorbed.