After a hard working weekend, we needed a quick escape.    Sunday night at 7pm we found ourselves at the last night of the Little Saigon Summer Night Market, in Westminster.  We wandered around exploring and as we left we discussed how glad we were that we went.  It is only 10 minutes tops from our house and it felt like a whole other world.    I first read about this in the trusty AAA Magazine, in the beginning of summer, and put it in my Cozi family Organization App under the category of "fun things to do."  I came a crossed the dates recently and marked my calendar for last day, hoping we'd find time.   Sometimes, you have to schedule fun or else you'll never get there.

In all honesty, my first instinct was to crawl up into a ball and sleep but I have a hard time doing that because I'm a pretty "antsy" person.  I can't imagine why I was tired by Sunday evening: I'm carrying a watermelon in my belly and I did a "shop and cook" all day Saturday and an "office organization and tail end of a cook on Sunday."
I decided that running ragged is more satisfying then being on the couch, and we set out to our mini adventure.  Besides, I did have some couch time Saturday in the pm, while my hubby recovered from his two day tournament by hibernating (picture sleeping bear) on the couch for a few hours.  We now have access on our TV to Amazon Prime movies/shows, as well as Netflix streaming.  With this, I have newly discovered watching TV series' on these apparatuses.   With summertime series scheduling, when I do turn on the TV I find myself not having a clue what to watch.  I'm a DVR creature of habit and pretty bad at channel surfing.   Anyways, this is my new solution.   I've been watching Parenthood Series 3 as my first series.  Between the ipad and the TV, I am getting through the series in a few weeks.  I feel so accomplished, just kidding.


Back to the Little Saigon Night Market... 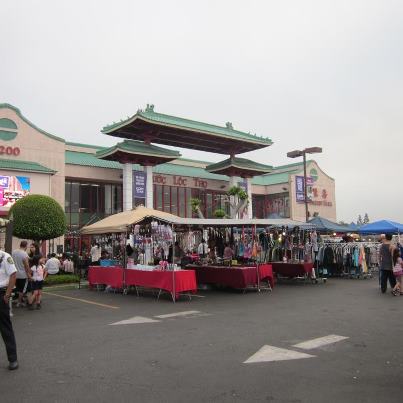 This was a food faire extravaganza with a row of vendors for shopping in the middle.

I do wish I had taken more photos, but 1) I didn't bring my camera and only had my phone and 2) I didn't want to look like too much of a tourist, we already stood out quite a bit.   So apologies, maybe more photos next year.

My husband quickly showed his adventurous eating side and was tasting grilled oysters.   It was massive.

Bonus - the prices of food was fantastic.  When you go to some of these faires or food truck events, you leave hungry and broke.  Not the case here.

Next we shared (well, I think I got about 20%) a pork skewer, which had been roasted on the open flame bbq.  It was tasty and he commented on how he loved the sweet tasting marinade that they use.

We did a lap around and settled back in the front where it was crowded, by the live music.  Here we ordered: Bo Bia.
Bo Bia, (I am missing some accent marks) which is Carrot & Jicama Roll w Vietnamese Sausage.    At first glance, I said, "Oooh Spring Rolls."  This very nice lady in front of us said, this one is actually Jicama with Vietnamese Sausage and Basil.  We got talking a little and she explained a couple things to us.  She was also pregnant, turns out she is delivering this Thursday so we wished her congratulations and best of luck to her. 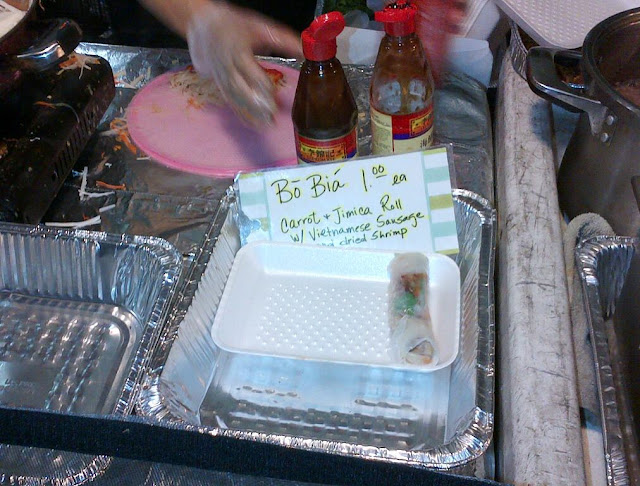 It was fun to watch the lady make the rolls because I have made spring rolls a few times and she of course was a speedy pro, in comparison.  I was wondering about the pink tray that she was making them on.  It appears that it is just a plastic tray with holes on it, which helps it not to stick after a quick dunk in hot water.    You can barely see in my photo but to her right (our left) she had an electric skillet going and a pot which was has a split in middle.  Half was for her hot water and in the other half she had the jicama, carrots, and sausage piled up.  After dipping the wrap in the water, placing it on the pink tray and filling it with the fillings, she would turn to her left and grab some basil, and then add the hoison sauce and a spicy sauce, and roll it up.

I also ordered some little round beds of Curry Rice with shrimp.  We had to wait for some more hot ones to be made and we got some hot ones and some not so hot ones.  We should have asked for all hot ones, because they were of course the best.

Our only ordering mishap was the Cabbage Plate.  It looked like Vermicelli noodles but when we got it, it was definitely a vegetable that looked like noodles.  He thought cabbage, I am not convinced it was cabbage but I can't put my finger on what it was.  Maybe more jicama.  Unfortunately, sorry no photo for examination. 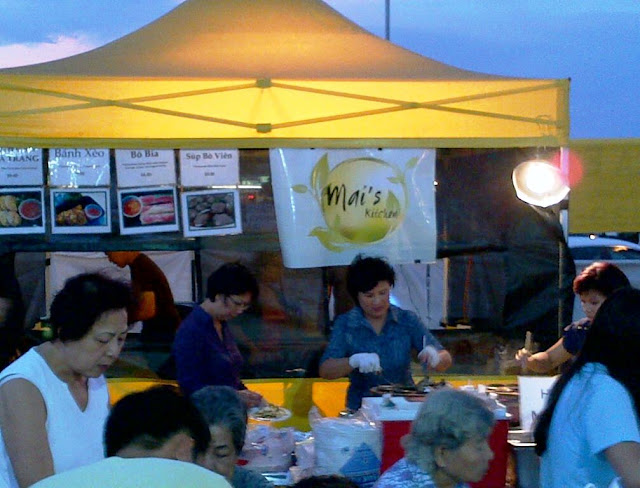 I originally took this photo because I have a good friend named Mai, who would also appreciate this event.   (Hi Mai~)  But it gives a good image of the booths where were ordering from.   Talk about some hard working women.

There was one line that was extra long, which of course intrigued me.  A 'you know a restaurant is good by the long wait outside,' type of feeling came over me.  It turns out it was for Sweet Tofu.  They had one option at this booth and it was Sweet tofu in three sizes.   So naturally, I ordered sweet Tofu, in a medium.  I was second in line when the huge pot of tofu ran out, I had flash backs to a couple funny fast food stories I have that have to do with pregnancy cravings and not being able to get the desired foods, but that is another story.   We (The people in front of me and behind me) got comfortable and consoled each other with laughs.   The new pot would be here in 5 minutes.  It, and another full pot, came in less than 5 minutes and we were back in business.   They must have brought it from their restaurant down the street.   They open this very very large pot and it is one big piece of tofu.  They very methodically scoop small pieces off into your bowl and pass it down the line to the next server who adds the sweet.  It was (from what I could figure out) condensed milk, boba, candied ginger and a sweet syrupy sauce.  It was tasty, however I think it is a bit of an acquired taste.  The candied ginger pieces were extremely potent when you bit into them.  I ended up taking it home and enjoying it when we got home while I could sit down.  Did I mention tired feet that weekend?

While I was waiting in line for my tofu, the hubby explored his options.  He definitely took the "When in Rome" approach.  He said he tasted Coconut Escargot (which they gal gave him for free) and came back with a bowl of snail looking items also.   I don't know the exact name, but he said they were good.  I watched with a semi intrigued face but did not partake in the sucking from the shells process.   He said all the (not to be taken wrong) "old ladies" were in line for these.  Probably because they are more traditional and have enjoyed them for many years.   He fit in like a charm, I'm sure.... 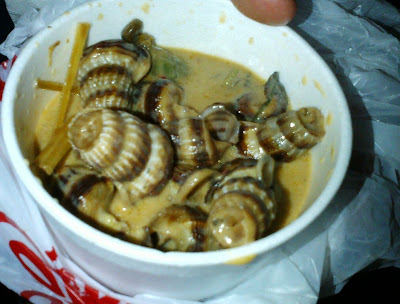 It was a fun hour and a half out on the town.  We had to leave because the neighbor called and said that his sprinklers were going to go off on my husband's open window truck at 8:30.  It was good timing though, we had tasted plenty and were ready to settle in for the weeknight.

I hope you enjoyed our little adventure, we sure did.
Have a great day and Eat Well and Play Well~
Posted by Unknown at 6:05 PM