Yesterday we had my sister-in-law and brother-in-law over at the house so that we could take care of some loose ends, cleaning out a storage unit, etc.

For lunch we had sandwiches from a "gourmet old fashioned" deli sandwich shop down the street.   The group ordered two meatball sandwiches, one pastrami, and one corned beef sandwich.  The menu was so exquisite you felt obliged to order more than just a turkey sandwich.    It was a feast eaten on our front lawn while going through boxes.  Good food and good company during not so pleasant chores.

Today's blog is a little shot out to Men Who Cook.  I happen to have a handfull of them around me.  My hubs is great cook, our brother-in-law is too and rocked this meal below, my dad can make a mean meal, and last but certianly not least my hubs dad (who is in heaven now) was a great cook.   We found his binder of collected recipes and a journal of handwritten recipes yesterday, which was to be celebrated as it was pretty much top priority of things we hoped to find in the collection of boxes.  The four of us decided that it would be an amazing thing to have published in his honor, donating portions of the proceeds to Machular Degeneration.

After we were done with our tasks we took a long awaited trip to dog beach for a walk on the sand and a moment with the sunset.  It was the perfect treat after an emotional day.   Nalu's (our dog) cousin, Casey experienced his second trip to dog beach and I'm pretty sure that he thought he was on vacation or in heaven.   It didn't take more then a few seconds before he was galavanting through the cold waves of the ocean.   It was warm yesterday and very little wind, which made for a gorgeous walk.

Back to the food: 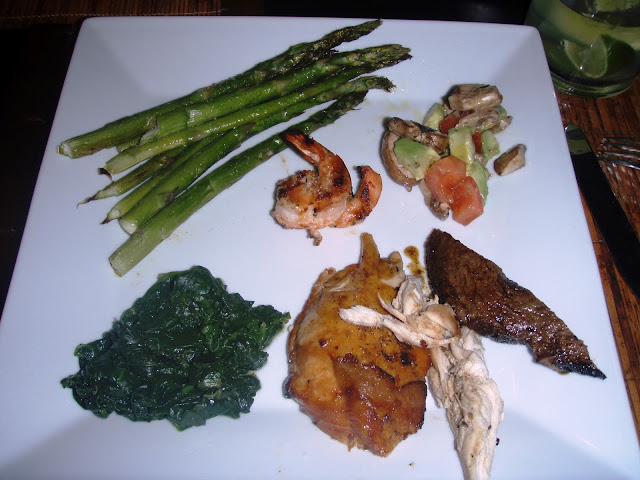 After we got the muts dried off and settled at the house we took a group trip to the store.  The two men were quickly ahead of us in the vegetable section of the market.  The hubs grabbed some asparagus and the bro-in-law was planning a mushroom, avocado, tomato salad of which we had all of the ingredients from, with the homegrown avocadoes that they brought over.
The two girls looked at each other and kind of giggled saying, isn't this nice that we don't really have to think about what's for dinner, they are just handling it.  The men were quickly off to the meat section hunting for the perfect catch.  They settled on a packet of 3 ribeyes that was majorly on sale and 12 head on shrimps.   The head on are cheaper but take few minutes of manual labor. 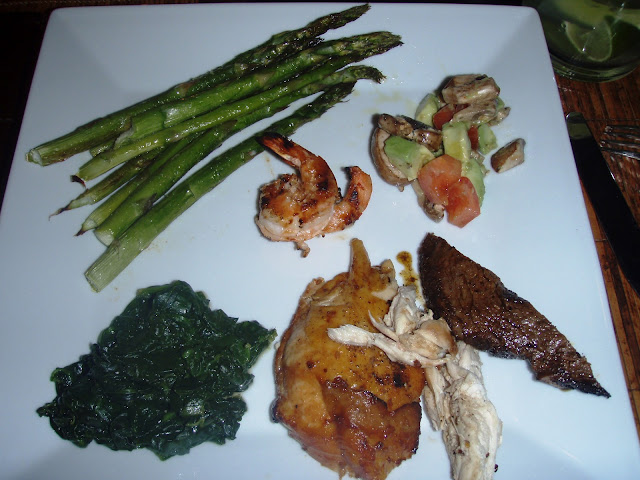 They seasoned and oven roasted the asparagus(on a cookie sheet), steamed the spinach, dressed the salad with dressing from the fridge and salt and pepper, seasoned and grilled the shrimp.  The shrimp were seasoned with salt, lime juice and sweet chili sauce and were an amazing little treat.

The chicken  breast was marinaded in teriyaki sauce that was in the fridge and the meat had 2 different kind of rubs.  Two were rubbed in a delicous meat rub and the remaining one (a trial) was rubbed in espresso roast coffee, new mexican chili powder, ancho chili powder, salt, pepper, and garlic powder.  Timed perfectly and allowing time for the meat to rest under tin foil, they were of course both a success.

The two gals in the group's only task were washing and stemming the spinach, pulling out the chicken breast and asking the boys to cook it, opening the wine and setting the table.  I don't think we can can complain there.

It was a great meal, with great people whom we are happy to have as family.

Today I got an onion lesson:

Those of you who have friended EWPW on facebook may have heard me relish about a good onion cry.  Well the truth is I was starting to dread the onion cry and have started wearing wrap around sunglasses to avoid the cry, which was still unsuccesful.   Last week, I asked my hubs if he would cut an onion for me so that I didn't have to do it.

This morning, while my hubby heard me say oh no the recipe calls for a chopped onion, here comes the tears.  (Recipe in process was Zuchini Tots, a success and coming soon)    He was gracious enough to join me in the kitchen and said,  "I will cut it for you if...  you pay attention and watch what I do."   I finally agreed to take the onion chopping lesson and when we were done, I asked why didn't you teach me this before.  His comment was, because you didn't want to listen to it, gotta love hub/wife banter. 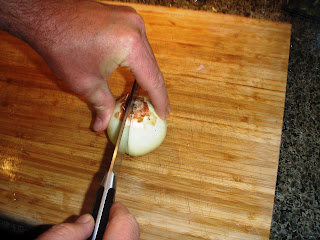 First you peel the onion, but you leave the root part still on, this is key.
Root end up, cut the onion in half.
I think at this moment I stopped him and said, where did you learn this "technique" from and he said a very good cook.  Turns out it was his house host while he played waterpolo in Australia, she taught him a few things about cooking, I do belive. 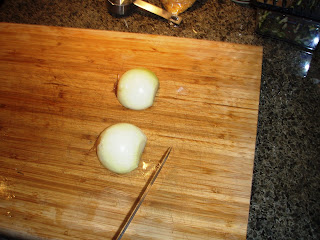 Next you turn the halves over on their sides like so. 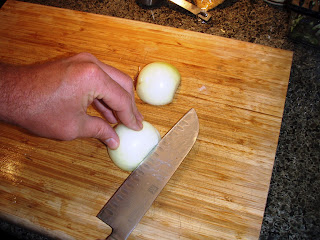 Notice the root side is to the left and you take the knife and cut a slice through the middle of the half. 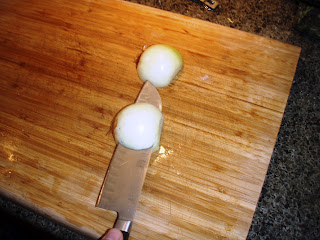 Taking great care to leave about 1/2 inch before you get to the root end, so not cutting it all the way through. 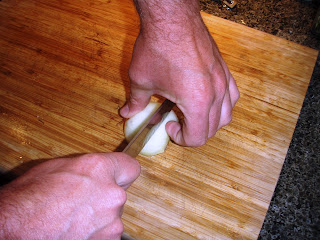 Then you put your left hand on the top of the onion sort of holding it together and start to slice in rows. 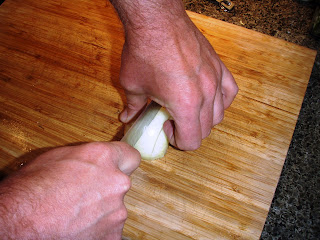 Using the proper cutting technique of curling those finger tips in to protect them.   We don't want onion and fingertips. 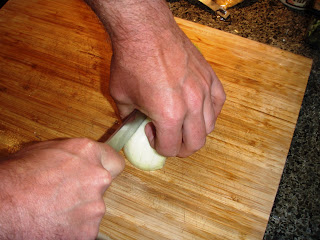 Cut your last row, but take care in holding it together. 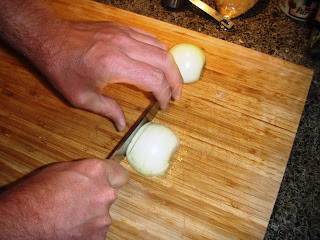 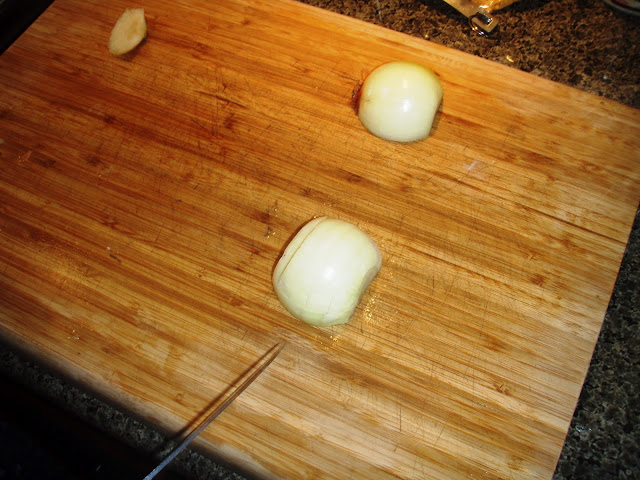 Amazing how it is so nice and together and no tears yet in my eyes. 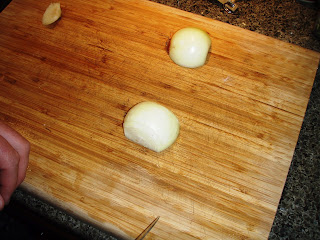 You then take the onion and turn it 45 degrees. 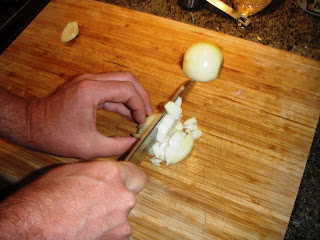 And proceed to cut another row of cuts, creating... 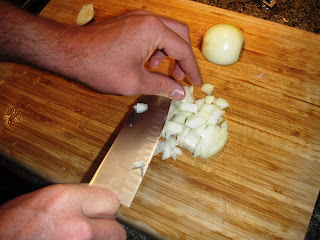 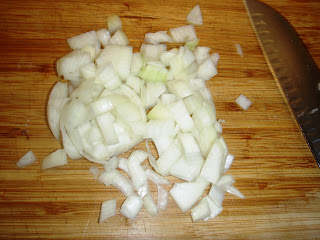 Beautiful AND no kleenex involved.
I was of course, responsible for practicing my newly learned skill on the second half, I managed pretty well if I don't say so myself. 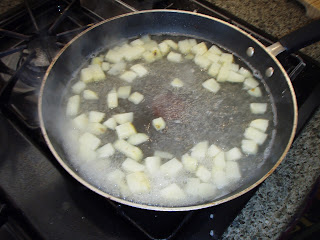 A few minutes later I turn around and he has this going on the stove.  This is one potatoe chopped into cubes and he is boiling it in water.  I said hmm, I have never seen them cooked like this before. 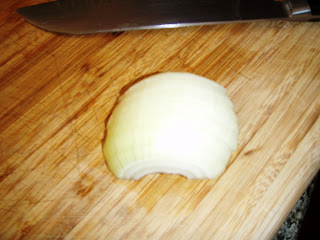 He chopped another onion half for his soon to be breakfast feast. 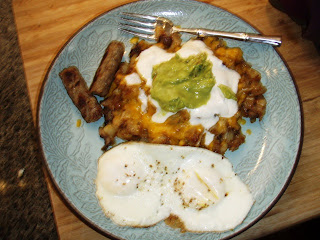 Meanwhile in the time it took me to upload pictures from my zuchini adventure, (we nibbled on a few and then saved them for midweek breakfasts on the run)  this was being whipped up.

I think he's getting into this blog life because he called me from the computer and said I think you better take a photo of this.  I said wow it looks delicious, can I have some?  He said of course, we can share.   I said, oh Greek style/family style (which is a preferred method of his from when he saw it in Greece, particularly with the Greek or Village Salad) and he said yep.   And then I continued the fantasy and said, like we're in the Greek Isles and we can eat on the veranda and proceeded to embrace him, grabbed his opposite hand and danced around in the kitchen to make believe music and ocean breeze, for a couple minutes. 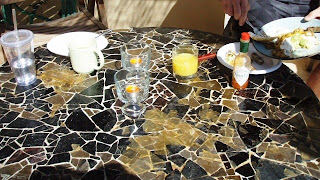 It just so happens that we did eat out on the veranda or as some like to say our back patio.   We decided to place a treasured handmade mosiac coffee table of his dad's on the back porch last night instead of garage saling it.  On task list soon is layers of polyurethane in order to water proof the table.   You can actually see the old layer that we are in the middle of peeling off.  Underneath that yellowing layer was a beautiful table that looks perfect were we placed it. 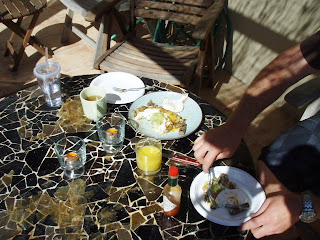 Have a great Sunday and EWPW ~
Posted by Unknown at 12:59 PM