As always, this was an action packed weekend in the ewpw household.  On Saturday, in the midst of moving two very heavy armoires up two very long flights of stairs and then into our house, we almost grabbed takeout.   However, after trying to think about what to get and nothing sounding too compelling, we instead decided to whip something up at home.   This is what I came up with.  I like to think of it as a Mediterranean salad. 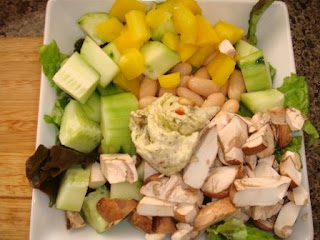 There are cannellini beans, (canned, rinse well) which are a great source of fiber and protein, yellow bell peppers, mushrooms, Mediterranean hummus and cucumber. 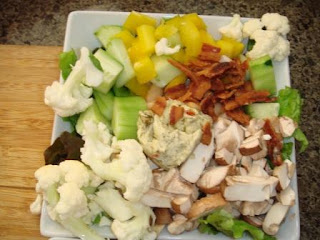 At the end, I threw on cauliflower and bacon and a little bit of olive oil and salt/pepper.  This hit the spot and was way healthier than anything I could have ordered. 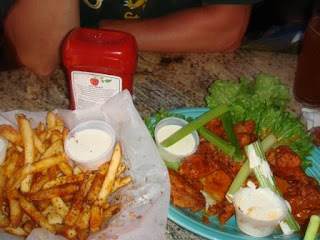 Later in the evening we met up with some good friends for a night of good ole fashion dinner, drinks and dancing.    There was debate going on whether or not I was going to post this picture.  I think it’s fair that I post it and say that I did partake in tastings of all the fried food that hit the table.   And then  I split a bacon guacamole burger with the gentleman, ditched half of the bun.   There's a time and a place for everything and Saturday night was a time for french fries, especially after making good decisions all day long with oj, yogurt and granola, orange, tea, salad etc.  It was a great night out with good friends and an added  bonus was that I burned extra calories on the dance floor.

Sunday I started the day with a cleansing session of a run/walk to the bolsa chica wetlands.  I didn't have my car and the husband was gone, so I was forced to run there.   Everything happens for a reason.   I turned back a few minutes before planned because I saw a coyote in the near bushes and I thought it was a good idea for the pup and I to exit as soon as we could.
The weekend ended with a bang.   We went out to eat in Hollywood and saw Rain, a Beatles Tribute Band at the Pantages Theater.  Great show, and great time with family. 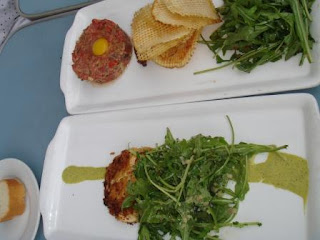 First to hit the table was steak tartare, a crab cake and mussels.
We split all three between the 4 of us at the table and wow was it good.
The presentation was telltale to the taste. 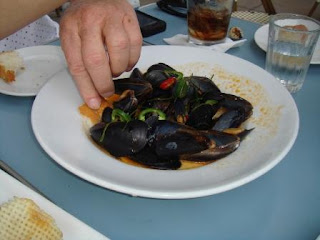 ﻿We also all shared a brie and carmelized brick oven pizza (amazing), ceasar salad (traditional dressing), salmon, and a couscous stuffed red bell pepper.   This dinner was such a treat and did not dissapoint.  The show afterwards was spectacular!
Hope you had a good weekend too~
Posted by Unknown at 11:03 PM